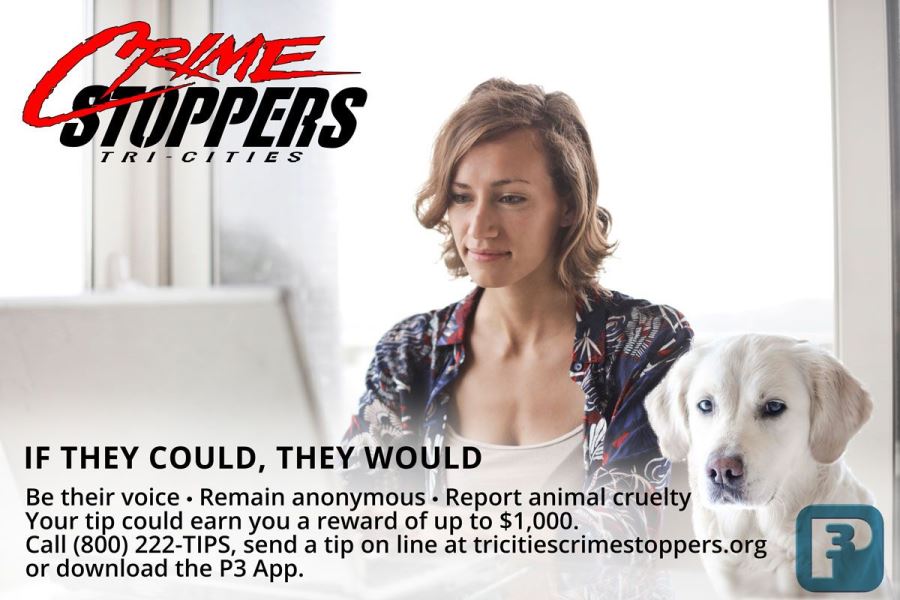 Crime Stoppers accepts tips and information about crimes in order to solve or prevent such crimes.   That includes our four legged community members as well.  Study after study has shown the direct connection between abuse of animals and criminal activity by humans. Please remember when you make a report to Tri Cities Crime Stoppers, all tips are anonymous.  Help prevent animal abuse and neglect.

Crime Stoppers is funded through your Donations.

A person is guilty of animal cruelty-

Is a sadistic “contest” in which dogs- specifically bred, conditioned and trained to fight, are placed in a pit or arena of some type, to fight each other for the spectators’ entertainment and gambling.

In Washington State animal fighting is a class C felony and includes a person who knowingly:

Animal Hoarding is a human behavior that involves the keeping of an excessive number of pets without having the ability to properly house or care for them, while at the same time denying this inability. Along with other compulsive hoarding behaviors, it is linked in the American Psychiatric Association Diagnostic and Statistical Manual of Mental Disorders - Fourth Edition (DSM-IV) to obsessive-compulsive disorder and obsessive-compulsive personality disorder.

According to the Hoarding of Animals Research Consortium, the following criteria are used to define animal hoarding:

Finding a stray or lost pet

Help keep animals and citizens safe when you come across a stray or lost pet.

Our Partners
No one organization can do this alone.  Want to join in this effort?  Become a part of the Tri Cities Crime Stoppers Animal Abuse  group.  Contact us at  our business line(509) 582-1351.
Pet Overpopulation Tri Cities
The Pit Bull Pen
Tri Cities Animal Shelter & Control Services
Tri-Cities Crime Stoppers
Anderson Software © 2020 All Rights Reserved